The Tragic Fate of Singtel- Will Price Plummet Continue?

Since Singtel announced its Q1 FY19/20 results (ending 30 June 2019) on 8th August 2019, it has dropped from its peak of S$3.56 per share on 5th July 2019 to the current S$3.10 per share. That is a huge plunge of its share price by almost 13% within 2 months. But if one compares Q1 FY19/20 to the prior Q1 FY18/19 financial results of a whopping 35% drop in profits, then this is considered as just a small chink in the armour of Singtel.
Even if we just compare it to the previous quarter of Q4FY/18/19 of S$773Mil, this still represents a 30% decline in net profits from 2 consecutive quarters. Is this the start of an ominous downward trend?
To complicate matters, investing in Singtel shares also depends on widely fluctuating seasonality market sentiment. There are certain period during the year whereby the share price rally without any apparent reasons and at other times, it is in doldrums form regardless of financial performance. The strange pattern of huge plunge in share price typically happens after dividends declaration during the second half of the year and then all the major players started jumping right back in before the final dividends declaration the following year tends to repeat itself all over again and again.
A few key points to highlight with regard to the latest performance:
1. Disastrous results in overseas market for associate companies.
From the financial results (please refer to screenshot 1), the chief culprit for the weak numbers is once again the performance of Singtel’s associate results. A closer look will reveal that this is actually the result of Bharti Airtel fighting a brutal price war in India when Reliance Jio jumped into the fray in September 2016. Investors need to be skeptical of the honey coated words from analysts that the situation is expected to improve due to consolidation of players in the India telecom industry and “the sun will shine once again soon” talk.
So far, I have not seen any signs of major improvement in getting out of losses yet despite the crystal ball predictions by these analysts for the past 1 year. The rights issue for Bharti Airtel was the last straw for me to sell off all my stakes in Singtel. In March 2019, Singtel pumped in US$525Mil (around S$719Mil) for its 15% direct stake in this fund raising exercise to re-capitalize the balance sheet of Airtel. The funny thing is that after I sold off my shares, it went on to rally to a high of S$3.54 before taking a plunge back to S$3.10 recently. 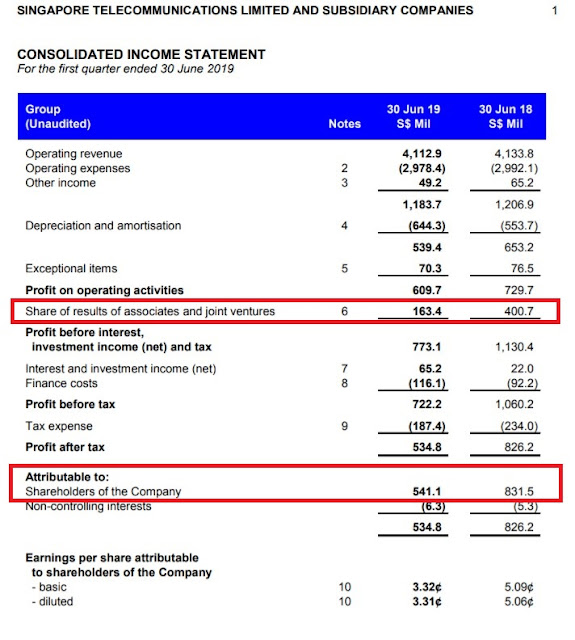 The only good news is that excluding Airtel’s disastrous financial results, contributions from regional associates would actually have risen by 10% driven mainly by Indonesian Telkomsel. So not all is bad.
2. Cybersecurity and Group Digital Life businesses continue to make losses
Singtel’s cybersecurity business continue to chalk up losses of S$102Mil (before taxes) in last financial year and the bleeding continues in the latest first quarter results announcement. As usual, Group digital life is also still in the red.
The hope here is that Trustwave will start turning in profits and eventually, an IPO can make spin off these Trustwave along with digital life businesses by Singtel to reap a return on investments similar to what they did for Netlink Trust.
Singtel management kept emphaisisng a different set of KPI should be used to measure these businesses instead of just purely profit and losses. I am not sure whether I buy their logic. To me, a business must definitely be profit making else it will end up like WeWork IPO- a USD47 billion valued business is now possibly facing bankruptcy. The strange phenomenon of technological startup companies going for IPO with track record of huge losses is something which I cannot comprehend the sanity of it.
3. Bright spot- Rise of 5G Wireless Network for Australia, Singapore as well as for other Asia overseas markets.
Singtel has already made major investments in network spectrum under Optus in Australia. In Singapore, it is expected to be pump in significant capital expenditure into the 5G network development. Given the high demand for high speed internet services and the conveniences offered via mobile network for this technological leap, Singtel would be able to attract lots of customers to drive its earnings forward.
4. Excellent corporate culture in using technology for innovation and cost control
Singtel’s management team is well known for using technology to drive productivity and cost control. For example, it had long began implementing Robotic Process Automation (“RPA”) into its various internal work processes. This has greatly enhanced productivity by removing routine work using manual labour.
In addition, continuous developments in its digital services and products and bundling them with existing services as well as the synergy in implementing them across various overseas market offers great value in retaining existing clients and attracts new customers.
5. Valuation of Singtel share price
Now this is extremely challenging as it is a reflection of one’s outlook of the future variables that determines its pricing. For me, I will use what I can see with my own eyes that is, based on the latest published financial results. A quick and dirty way to do the valuation would be since Q1 FY19/20 profit dropped 30% from the Q4 FY18/19, we will apply the same discount to the price on 30 June 2019 of S$3.50 to derive a conservative floor target of S$2.45 per share. The assumption here is that given ceteris paribus and the only main driver is the worse than anticipated financial performance, then the share price should drop accordingly in percentage.
Given that Bharti Airtel is already reaching the bottom of the price war and also the potential growth of new 5G services subscription as well as growth in digital services, I will reduce the haircut by 15% to derive an estimated S$2.98 per share.
Parting thoughts
At the current pricing of S$3.13 per share, I thought that Singtel is slightly overpriced but overall still decent given its businesses spread across various overseas markets and the impending rise of 5G technology adoption which offers attractive value proposition to consumers. The only question mark is whether Bharti Airtel in India can win the competition for subscribers to become profitable again after quarters and quarters of losses in the India market. The gain in India market share and revenue seems to be pointing to some obscure revival signs-albeit still not that clear at the current juncture- that things may improve next year.
Posted by Blade Knight at 05:03