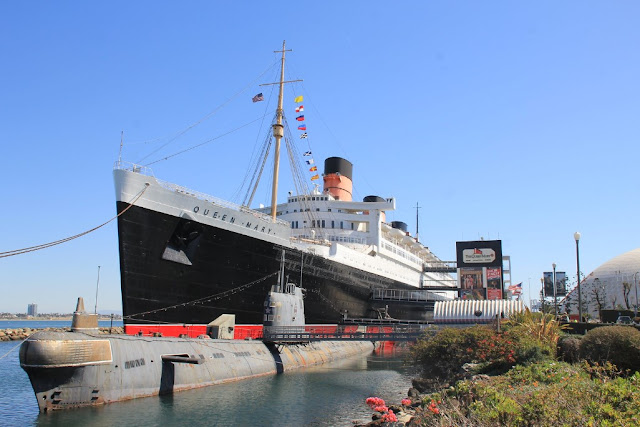 During my last post, I have pointed out that besides the “Curse of the Queen Mary”, there are at least a few scenarios that can happen to cause further downsides. Unfortunately, a new issue did indeed surfaced besides the "Queen Mary potential lease default rumor”. Based on the recent announcement by Eagle Hospitality Trust (“EHT”), SGX had raised several queries with regard to the other hotels in the stable of portfolio of EHT. Investors panic and it seems that they do not buy the reply by EHT management and became even more skeptical on the valuation of the other hotels held in the Trust.

The first day debut of the IPO already took into account the forex risk and other business risk. The “Curse of Queen Mary” issue shaved off around another 20% off that recently. However, prices still continue to dip which means that the recent announcement concerning the major shareholders disposing hotels to EHT prior to the IPO is making existing shareholders very uncomfortable with the valuation of the other hotel assets.

From the range of S$0.545 to S$0.585 per unit since the lifting of the trading halt, it plummeted to an all day low of S$0.470 per unit on 4th November 2019 (Monday). This is another 20% plunge in value which indicated that investors were extremely worried that there is something wrong with the entire Trust and whether most of the hotel assets can indeed generate the required lease income to sustain the projected distribution. 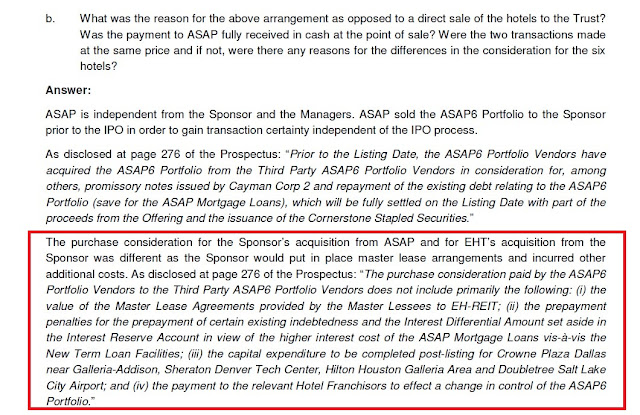 To summarise the above reply to SGX, this would mean that ASAP Holdings sold the 6 hotels to Urban Commons (Sponsor). EHT in turn buys from Urban Commons the 6 hotels at a higher price than what the sponsor had paid originally to ASAP Holdings due to the differences as mentioned in the SGX reply by EHT. As to exactly how much more EHT had paid relative to the prior 3 months acquisition price between Urban Commons and ASAP Holdings, it was not disclosed. So it may appear that EHT is getting the shorter end of the stick by a mere 3 months differences. Many existing investors may now have concern over the suddenly inflated valuation in just 3 short months of clever financial engineering. There will also be lingering doubts on the income generating abilities of not just the said 6 hotel assets but also the entire other hotel assets placed in the Trust. Why not just sell the 6 hotels directly to EHT instead of to Sponsor and then Sponsor sell to EHT?

Also most importantly, some investors may probably begin to wonder whether there are some hidden agenda or internal rebate programme between Urban Commons (Sponsor) and ASAP Holdings. This gives rise to the next set of questions from SGX as discussed in the next section below. Are they related parties?

Who are the actual owners of ASAP Holdings which sold 6 hotels to Urban Commons which in turn injected these assets into EHT for IPO? Are they related to Urban Commons (Sponsor)?
ASAP Holdings are held by Frank Yuan, Norbert Yuan and Jerome Yuan. ASAP Holdings is a California-based acquisition advisory and asset management firm specializing in hotel assets which has had known business dealings with the Sponsor in the past. However, they are unrelated to the Sponsor or key management of EHT and are 3rd parties.

How did they end up also as shareholders in EHT IPO? Also what are relationships between the Yuans?
Frank Yuan, Norbert Yuan and Jerome Yuan were introduced by the Sponsor to the EHT IPO placement agents. They took up private placement tranche making up 33.4% of the total number of stapled securities on the listing date.
SGX Query on 1 November 2019 and reply from EHT: 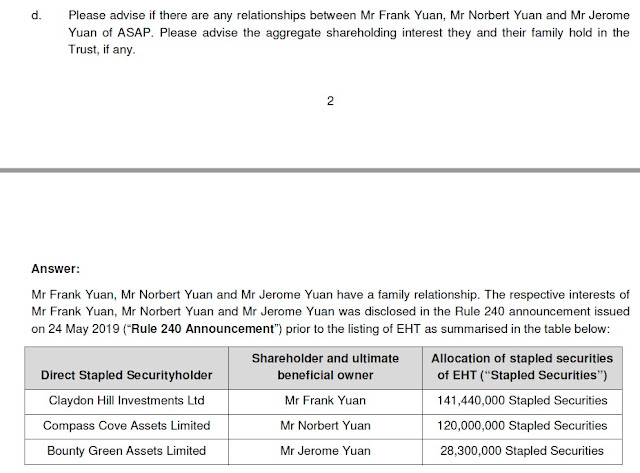 Are these substantial shareholders still holding on to their shares/units in EHT?
Yes. BUT unfortunately, the Yuans have begun paring down their interest in EHT and selling their units in millions for the past few weeks. This maybe perceived as a signal or proxy with regard to their views and outlook on EHT future.


Norbert Yuan started with 120Mil of stapled securities. As at 30 Oct 2019, his stakes via Compass Cove Assets Limited had dropped to 94.2Mil units only. Read the other numerous announcements on "Change of interest of substantial shareholders" to find out how many shares were being dumped by the other members of the Yuan family. 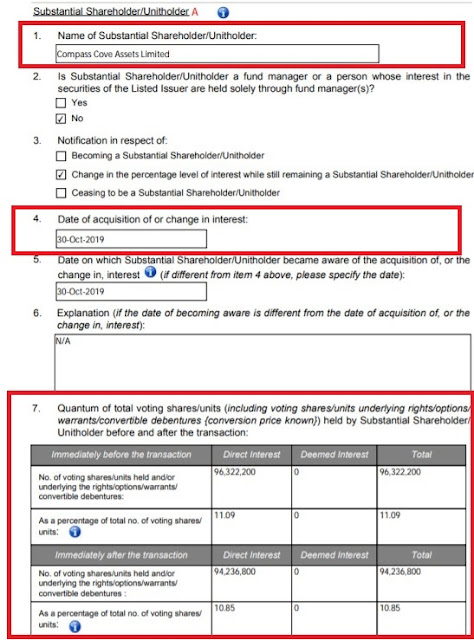 Parting Thoughts
The substantial shareholders (Yuan family) who held 33% stakes in EHT during listing are hotel business specialists. The fact that they began dumping millions of shares in the market not only created tremendous selling pressure but also signal a possible negative outlook on EHT businesses. Coupled with the fact that many investors are extremely concerned with the valuation of the hotel assets acquired from ASAP Holdings and then injected into EHT by Urban Commons, the red flag on whether the entire hotel assets can indeed generate the necessary rental income as originally projected were now being raised.

Going concern of the entire Trust maybe another major issue that investors are worried due to not just the Queen Mary default rumour but also the manner of the financial engineering of the 6 hotels acquired from ASAP Holdings which were eventually injected into EHT by the Sponsor. Skeptical investors may perceive such a move to insinuate ulterior motive by the Sponsor to make easy money by dumping poor quality assets into EHT.

I hope that the release of the 3rd quarter results by next week (13th Nov 2019) will reassure all investors. The current challenge seems to be mainly the lack of confidence in the Sponsor which resulted in a dividend yield of 13.5% based on current unit price of S$0.475. But then again, what if the sixth sense of many investors are correct and it turns out that the Trust have lots of fundamental issues as evident from the various strange things that keep popping up at EHT?
Posted by Blade Knight at 21:43